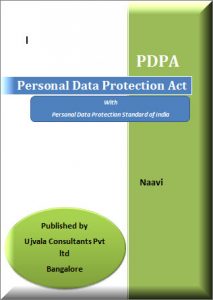 Naavi was the author of the first book on Cyber Laws in India when he released “Cyber Laws For Netizens” on December 9, 2000, the day when Information Technology Bill 1999 was introduced in the Parliament.

Now the proposed draft Bill titled “Personal Data Protection Act 2018” had been introduced in the last Parliament on the recommendations of the Justice Sri Krishna Committee.  This would have been the first dedicated Data Protection legislation in India and would be so when it is ultimately passed into a law.

At present the Bill has lapsed due  to the dissolution of the Parliament and will have to be re-introduced in the next Parliament.

There is no reason to think that the Bill will not be re-introduced immediately after the new Parliament comes into existence and becomes a law which may be renamed as “Personal Data Protection Act-2019”.

After the developments in the Election scenario in the last two days, it appears that the BJP Government led by Mr Modi is likely to come back. We can therefore expect that the Bill PDPA 2018 will be reintroduced shortly without much changes and will be passed during the current year.

Naavi has already taken the initiative to create an online training program on PDPA 2018.in as it exists now.

As a part of the curriculum support, Naavi is now preparing a Book titled “Personal Data Protection Act” which will be released shortly.

Initially the book will be used as course material for the PDPA training program and will be placed on the E book section thereafter.